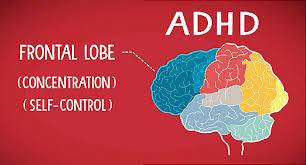 Most ADHD Scientists and Researchers believe that it is caused by an imbalance in the level of neurotransmitters in the brain. There is growing evidence to show that smoking and drinking alcohol during pregnancy as well as premature birth can lead to a child getting ADHD. However, children diagnosed with ADHD have higher chances of experiencing ADHD symptoms as adults if left untreated.

Symptoms arising from ADHD contribute to cropping up of various health problems such as controlled substance abuse, chronic stress, compulsive eating, low self-esteem, anxiety among others. Worse still, adults with ADHD neglect their health by failing to go for check-ups, ignoring medical instructions, or forgetting to take vital prescription medicines.

Adults with ADHD have strained relationships at work, as well as with family or romantic partners. A common symptom of ADHD in adults is disorganisation, and people around them may become frustrated with their insensitivity or irresponsibility. On the other hand, they might feel fed up with the constant nagging from people around them imploring them to tidy up, pay attention, or to be organized.

Various studies show that over 80% of adults with ADHD feel a strong sense of underachievement in their careers. This is one of the reasons adults suffering from ADHD have trouble keeping a job, meeting deadlines, as well as sticking to the prescribed corporate rules. The adult with ADHD also suffers from financial difficulties such as impulsive spending which lead to late fees on your bills, or failure to pay the bills altogether.

Symptoms of ADHD in Adults

Presently, there are no blanket symptoms for adult ADHD. However, researchers have collected data and drawn up various categories to highlight the common symptoms of adult ADHD including:

This has to be the most common symptoms and victims have trouble staying focused on a daily schedule and concentrating on mundane tasks. Symptoms in this category include:

Victims of adult ADHD have trouble staying on top of things as well as prioritizing the things they need to do. Other symptoms in this category include:

In this category, one has trouble controlling their behaviors and comments. They will rush through tasks before reading the instructions, act before thinking, and find being patient extremely difficult. The symptoms include:

Most adults with ADHD have a hard time managing their emotions such as frustration and anger. The emotional symptoms of adult ADHD include:

This may manifest as they do in children but outgrow it. However, hyperactivity in adults manifests as:

The effects of ADHD in adults have far-reaching effects, and despite the use of prescription drugs to manage them, one can seek other options such as individual therapy, behavioral coaching, educational assistance via Think Organise Do, self-help groups, and vocational counseling. Be sure to go for regular psychiatric checkups to monitor the condition.